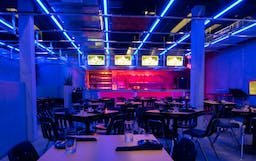 There are certain things you really only need to do once. Like cage dive with great whites, argue about politics with your father-in-law, or drunkenly get a tattoo. Even though you claim you don’t regret those Semisonic lyrics on your forearm, you’re probably not going to go back for the second verse. For us, dinner at Mission Chinese Food in Bushwick falls into the same category. Experiencing it once is enough.

This is the second location of Mission Chinese in New York City, and if you’ve been to the original on the LES, know that this place is like its younger, louder, rowdier sibling. Overhead lights continuously change the space between neon shades of red, yellow, green, and purple, so you feel a little like you’re eating in an Area 51 cafeteria during a fire drill. The open, concrete dining room has TV screens above the bar playing videos of people eating huge spreads of food. Head downstairs to the bathroom at any point, and on the mirrors, you’ll find video displays of Chinese characters streaming downwards like on a monitor in The Matrix. 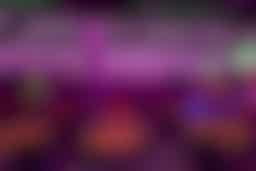 Like at the original Mission Chinese, food arrives all at once and quickly, with a few things that work well, and others you should definitely avoid. The kung pao pastrami and stir-fried celery are both so salty that you’ll want to ask for a handful of cough drops rather than a glass of water. Even just one spoonful of the vinegar peanuts tastes like a shot of sweetened vinegar. And the salt cod fried rice is bland to the point that it’s essentially just a $16 bowl of warm white rice.

On the other hand, the intensely spicy Chongqing chicken wings, with juicy meat and crispy skin, should definitely be on your table. There are also very good drunken noodles, with rich stir-fried ramen, chicken sausage, and sweet pink peppercorns. And the best thing here is the sourdough naan, which has a chewy and slightly charred texture, and a coating of honey butter and tangy sheep’s milk cheese.

Avoiding the misses on the menu takes some strategizing, but getting your drink order right is easy - focus on the excellent cocktails, like the Phil Khallins with gin and coconut milk or the General Tso’s whiskey sour. While a lot of the atmosphere is more distracting than it is enjoyable, you won’t forget a meal here anytime soon. And it’s certainly less of a commitment than getting the chorus to Closing Time tattooed on your forearm.

There’s not too much going on here. Besides a little bit of texture from the granola, this is really just a small bowl of cucumbers.

There are peanuts, smoked garlic, and seaweed in this dish, but it just tastes like spoonful after spoonful of blueberry vinegar.

The sheep’s milk cheese makes this savory enough to eat as an appetizer, and the coating of honey butter makes it sweet enough to eat for dessert. But no matter when you eat this chewy, soft, and crispy fried naan, you’ll be happy.

One or two bites of this are pretty enjoyable, especially if they include the smoked tofu, but after that, the celery, celery leaves, and celery salt just become too much, well, celery.

The brisket is tender and has a little bit of char, but the unexpected hero on this plate is the broccoli. The big portion of crunchy greens is cooked with juices from the brisket and some oyster sauce, which makes it richer than broccoli usually is.

This is the spiciest thing we’ve tried here. And it’s excellent. The meat is juicy and tender, and the heat just makes it better.

The rich, spicy rice cakes and the sweet tofu skin in this dish are good. But mostly, what you taste is the extremely salty and smoky bacon.

There’s almost no noticeable flavor from the salt cod or the very scarce sausage, and even the rice itself is barely crispier than a side order of white rice.

The meat in this is tender and crumbles as you bite into it, but it’s so salty that it’s hard to eat a lot of this.

The rich ramen noodles are balanced out by bright herbs and sweet and bitter pink peppercorns. This should be on your table. 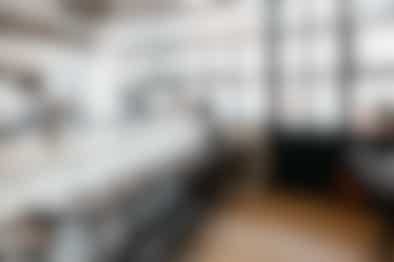 Kichin is a Korean restaurant in Bushwick that stays open late on weekends and serves some excellent fried chicken. 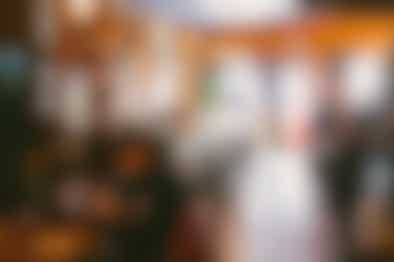 A nice, big Bushwick restaurant with interesting pastas. It's not quite a destination, but it's a nice addition to the neighborhood. 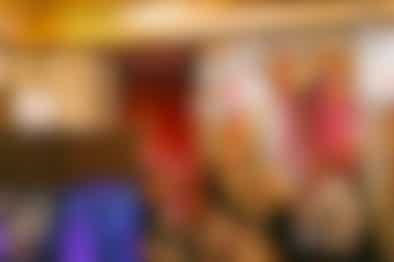 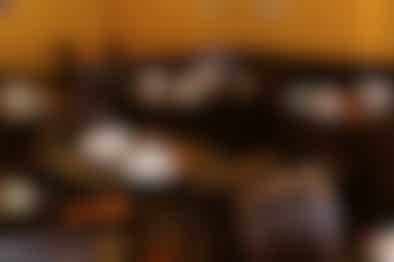 Kings County Imperial may not be traditional, but it serves some of our favorite Chinese food in New York City. Definitely our favorite in Brooklyn.

A Philadelphia import with a big following has now arrived in the East Village. Overlook the dumpy interior and shoddy service and put your face into a bowl of Dan Dan Noodles.
Restaurant Finder