In 2015, Silky Ganache was working as the head bartender at a small restaurant in Chicago. At this restaurant, they used to host Martini Nights, and the entertainment of choice was always RuPaul’s Drag Race. Silky didn’t know it at the time, but several later, she’d step out from behind the bar and compete on the show herself. And if you happened to miss that season (11), you’ll get a second chance to see Silky in action when she participates in the upcoming season of Drag Race All Stars.

But even with all her Drag Race success, Silky still hasn’t left cocktails behind. In fact, she has a book coming out called Cocktails For A Queen, which includes the drink we’ll be discussing today: The Silky Pudding. Silky created this bevergae back when she was running her Martini Nights, and it’s still something she holds near and dear. “It is, overall, a true representation of who I am as an entertainer,” she says, and that’s not just because of the name.

The Silky Pudding starts with some vodka, then it continues with a little more vodka. You will, of course, need to add some caramel, and then there’s RumChata to tie everything together. Obviously, this is a silky drink (pun very much intended) - but it’s also a great mood-setter. “This is a drink that people can sip on and enjoy,” says Silky. “You can have a few and you just have a good time with your friends, and it can also be the topic of conversation.”

Whether you host your own Martini-themed nights or you need a new signature drink to serve to friends who think you only know how to make vodka sodas, this is the cocktail you’re looking for. Let’s learn how to make one. 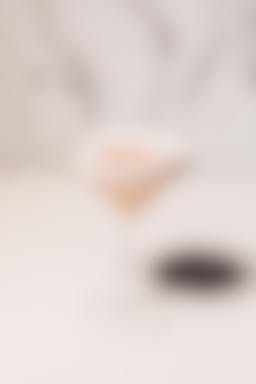 We’re recommending this product because we actually use, and like, it. Things you buy through our links may earn us a commission.

In case you’ve never tried it, vanilla vodka is exactly what it sounds like. There are plenty of varieties out there, but we tend to go the Stoli route. Whichever you choose, add .5 ounce to your cocktail shaker.

Yes, this drink uses two kinds of vodka - and that’s how you know it’s a quality, worthwhile cocktail. In terms of caramel-flavored vodka, Silky likes to use Smirnoff, so that’s what you should look for if you’d like the most authentic Silky Pudding. Pour 1 ounce caramel vodka into your shaker.

Honestly, feel free to use store-bought caramel for this drink. We won’t judge you, and your cocktail will be delicious. Or, if you happen to have some butter, sugar, cream, and salt (as well as a can-do attitude), you can also make your own. Here’s an easy recipe to check out. However you get your caramel, add .5 ounce to your cocktail shaker, and drizzly roughly 1 teaspoon into the bottom of your Martini glass for garnish.

What makes this cocktail silky? That would be RumChata - a liqueur designed to taste like a mix between rum and horchata. Grab a bottle, and put 1 ounce in your cocktail shaker.

Now we’re ready to chill this thing. Add a handful of ice to your shaker, and shake vigorously for 20 seconds. We want this drink ice-cold and well-diluted, so don’t be meek. (Your shaking should be loud and borderline rude.) Once you’ve finished, strain your cocktail into a Martini glass (which should be drizzled with caramel), and top with a few dashes of ground nutmeg. Why nutmeg? Because it’ll help round out the flavors of the drink and make your cocktail more dynamic. Also, Nutmeg is Silky’s middle name, so that spice helps capture her essence. Finally, enjoy your Silky Pudding, preferably while watching Drag Race, maybe even All Stars Season Six.

How To Make The Snakecharmer Cocktail
A durian-infused recipe from Guest Bartender Gates Otsuji.

How To Make A Silky Pudding Cocktail
A conversation-starting Martini from Guest Bartender Silky Ganache.