In case you aren’t aware, we have a zine now. It’s called IYKYK (If You Know, You Know, informally), and every issue will be an art, interview, and recipe-driven love letter to a specific type of food. The inaugural volume focuses on the Hong Kong-style café fare known as cha chaan teng (Spam! Macaroni soup! Other delicious things!), and we wanted to commemorate the launch with a cha chaan teng-inspired cocktail. That’s where Guest Bartender Stephen Jin comes in.

Stephen has worked at some of the best restaurants in New York City, and he’s currently heading up the bar program at Nowon in the East Village. Stephen also spent a good portion of his childhood in Shanghai, and one of his favorite drinks growing up was yuenyeung - a staple in cha chaan tengs and the inspiration behind his original cocktail, The Mandarin Duck.

Traditionally, yuenyeung is made with three parts coffee and seven parts Hong Kong-style milk tea, and it gets its name from the Chinese word for Mandarin duck. In Chinese culture, the Mandarin duck symbolizes fidelity, eternal love, and the felicitous union of two things that make an especially good match. These things might be two people - or, in this case, two distinct beverages that happen to work wonderfully together.

Before you dive into this recipe, you should know that it involves a centuries-old technique called milk washing, a process in which you intentionally curdle milk in order to strip away the harsher-tasting elements of a drink. The result is an especially smooth, translucent beverage that by no means looks or tastes like milk. This is a fun and relatively easy procedure, and it’s a valuable skill to throw in your back pocket. 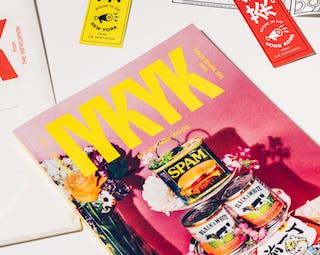 Introducing IYKYK, A Zine From The Infatuation 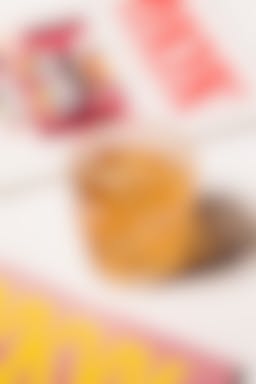 The good news is, we’re going to make one big batch at once - and, other than the milk washing part, the process is exceedingly simple. First, find a large mixing bowl, then add your cold brew, black tea, dark rum, osmanthus wine, sugar, and milk. Whisk until the sugar is dissolved.

Looking for osmanthus wine (also known as cassia wine)? You can typically find this sweet, herbal wine (flavored with osmanthus flowers) at liquor stores in Chinatown, but if you’re having trouble locating a bottle, you can always swap in an aperitif wine, such as Cocchi Americano.

In another large container, pour this mixture over the final ingredient, your lemon juice. Stir with a whisk, then let your mixture rest for at least 1 hour. Don’t be alarmed if you see some heavy curdling. That’s supposed to happen.

Once your mixture is good and curdled, pour it through a coffee filter and fine mesh strainer. This will remove the solids and clarify your drink. Next, discard anything that was trapped in your filters, and voila. You’ve just made a batch of The Mandarin Duck.

Finally, transfer your batch to a big glass bottle, and refrigerate until ready to serve. It’ll keep in the fridge indefinitely (seriously, this sort of milk punch lasts for years), but there’s no need to hoard it. You can always make another batch. When you’re ready for a taste test, pour 5 ounces over one large ice cube in a rocks glass (no garnish necessary). And if you need some reading material to enjoy while enjoying The Mandarin Duck, we suggest a particular zine.

We’re recommending the above products because we actually use, and like, them. Things you buy through our links may earn us a commission.